Dogs must be on a leash and be picked up after. It seems to be the complaint lately. Many walkers have complained about being chased and soiled sidewalks. People need to get out but shouldn't have to worry about someones dog biting them. Here is the law.

A local law, Dog Control Law of the Village of Cherry Valley

Be it enacted by the Board of Trustees of the Village of Cherry Valley as follows:

A local law relating to the control, confining and leashing of dogs.

Section 1. Purpose.  The village board of the Village of Cherry Valley finds that the running at large and other uncontrolled behavior of licensed and unlicensed dogs have caused physical harm to persons, damage to property and have created nuisances within the village.  The purpose of this local law is to protect the health, safety and wellbeing of persons and property by imposing restrictions on the keeping and running at large of dogs within the village.

Section 2. Authority.  This local law is enacted pursuant to the provisions of Article Seven of the Agriculture and Markets Law and the Municipal Home Rule Law of the State of New York.

Section 3. Title.  The title of this law shall be, “Dog control Law of the Village of Cherry Valley.”

a.        Dog means male and female, licensed and unlicensed, members of the species Canis Familiaris.

b.       Owner means person entitled to claim lawful custody and possession of a dog and who is responsible for purchasing the license for such dog unless the dog is or has been lost, and such loss was promptly reported to the dog warden and a reasonable search has been made.  If a dog is not licensed the term owner shall designate and cover any person or persons, firm, association or corporation, who or which at any time owns or has custody or control of, harbors, or is otherwise responsible for any dog which is kept, brought or comes within the village.  Any person owning or4 harboring a dog for a period of one (1) week prior to the filing of any complaint charging a violation of this local law, shall be held and deemed to be the owner of such dog for the purpose of this local law.  In the event the owner of any dog found to be in violation of this chapter shall be under eighteen years of age, the head of the household in which said minor resides shall be deemed to have custody and control of said dog and shall be responsible for any acts of the said dog and violation of this local law.

c.        Run at large means to be in a public place or on private lands without the knowledge, consent and approval of the owner of such lands.

Section 5.  Restrictions.  It shall be unlawful for any owner of any dog in the village to permit or allow such dog to:

a.        Run at large unless the dog is restrained by an adequate leash or unless it is accompanied by its owner or a responsible person and under the full control of such owner or person.

b.      Engage in habitual loud howling, barking, crying or whining or conduct itself in such a manner so as to unreasonably and habitually disturb the comfort or repose of any person other than the owner of such dog.

c.       Uproot, dig, or otherwise damage any vegetables, lawns, flowers, garden beds, or other property without the consent or approval of the owner thereof.

d.      Tampering with or foraging at garbage pails or trash containers.

e.       Attacking any other dog which shall be leashed or under control, or on the owner’s premises.

f.        Chase, jump upon or at or otherwise harass any person in such a manner as to reasonably cause intimidation or fear or to put such person in reasonable apprehension of bodily harm or injury.

g.      Habitually chase, run alongside of or bark at motor vehicles, motorcycles or bicycles while on a public street, highway or place, or upon private property without the consent or approval of the owner of such property.

h.      Create a nuisance by defecating, urinating or digging on public property, or on private property without the consent or approval of the owner of such property.

i.        If a female dog when in heat, be off the owner’s premises unrestrained by a leash.

Section 6.  Fees for Seizure of Dogs.  The fee for seizure and impoundment of dogs in violation of Article 7 of the Agriculture and Markets Law and of paragraph (a) of Section 5 of the local law are as follows:

b.      After any such seizure, the record owner of such dog or an adult member of his family, if the owner is ascertainable from the dog's license tag, shall be notified personally by serving such owner or adult with a notice in writing stating that the dog has been seized and may be destroyed unless redeemed; such notice may be served personally or by certified mail.

c.       A dog owner may redeem his or her dog from the pound upon payment in cash of the appropriate impoundment fees set forth in subdivision (a) of this section; if the dog was unlicensed at the time of impoundment, proof of obtaining license shall be required before release of the dog.

d.      The dog control officer or a peace officer having reasonable cause to believe that a person has violated this local law shall issue and serve upon such person an appearance ticket for such violation.

e.       Any person who observes a dog in violation of this local law may file a complaint under oath with the Village Justice specifying the nature of the violation, the date thereof, a description of the dog and the name and residence, if known, of the owner of such dog.  Such complaint may serve as the basis for enforcing the provisions of this local law.

Section 9.  Repealer.  This local law shall supersede all prior local laws, ordinances, rules and regulations relative to the control of dogs within the Village of Cherry Valley and they shall be, upon the effectiveness of this local law, null and void.

Debris pickup has gone back to Mondays only. 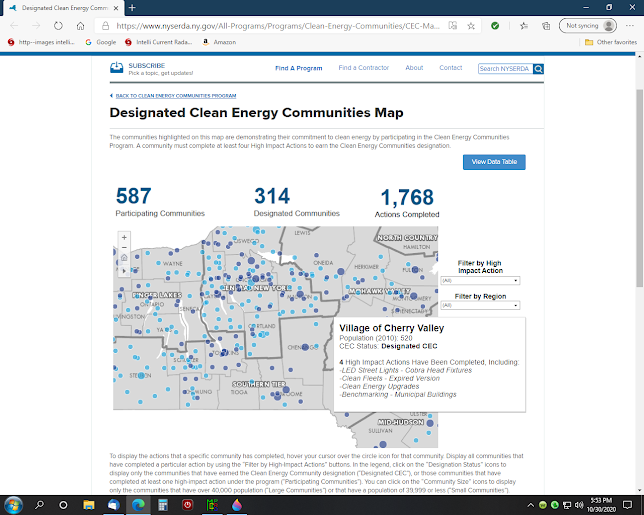 A good move to save tax dollars.